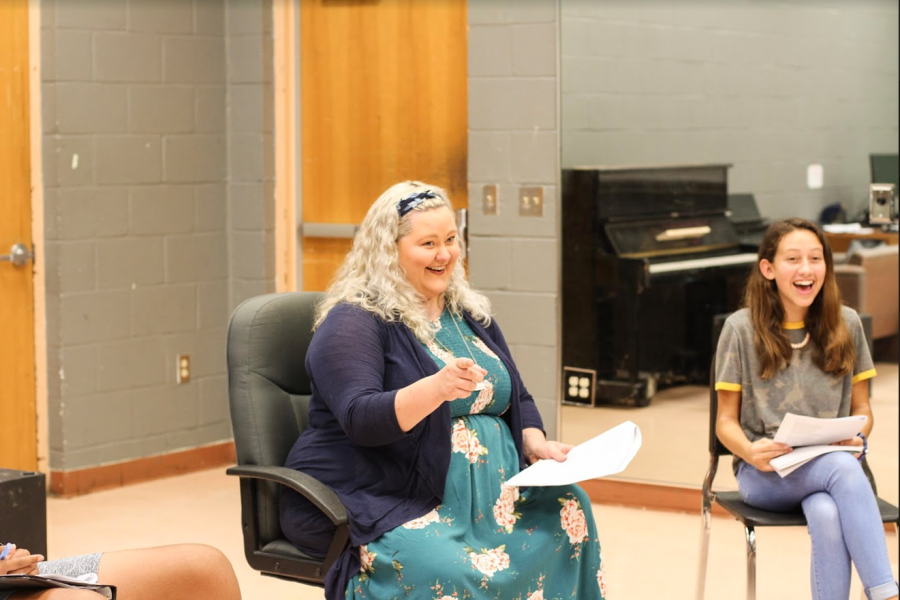 Theatre teacher Savannah Whetsell works with her students closely to make sure they get the best opportunity to thrive. She enjoys working with her students, especially the freshmen, because she feels that she’s “the first person she sees when they come into the department from middle school.”

The hall next to the Brandt Black Box Theater, usually buzzing with music notes and monologues, is tense with pressure. Two fresh faces part the sea of shaken students awaiting their arrival. Two hands inch closer to the bulletin board with a thin sheet of paper containing the future of the fall musical. A mass of students swarm around the board, scanning the “Much Ado About Nothing” cast list for their respective names. Screams of joy, anger, and sadness fill the space. The plan for each student’s upcoming semester depends on these few moments determined by two women who blend into the crowd. This fall’s audition room held new theatre teachers Kristina Leljedal and Savannah Whetsell.

Kristina Leljedal, a University of Florida alumna, teaches Acting III and IV, History of Acting, and Introduction to Theatre.

“Acting III is more about ‘What kind of artist am I?’ whereas Acting IV is asking, ‘What kind of mark do I leave?’” Ms. Leljedal said. “When it comes to Intro. to Theatre, I think it’s a matter of ‘What does theatre mean to me?’”

Previously, Ms. Leljedal worked at various theatre colleges. After that, she got a job in Broward County for 4 years, where she started the theatre program at Coral Glades High School. She is originally from South Florida and has always loved the area. When she got the job at Dreyfoos, she was “thrilled.”

“Dreyfoos is really a dream job for a teacher,” she said. “The students are so motivated, and it’s amazing to build valuable relationships. They always want to learn and become better actors. Every day, they inspire me to be better.”

Ms. Leljedal was interested in theatre and performance from a young age. She says that when she was a toddler, “my mom signed me up for dance classes, and I fell in love with it.” Later, she saw the play “Footloose,” and it changed her perspective on performing.

“I was talking to my mom on the way home from the show, and I realized something. I was like, ‘You can sing and act and dance all at the same time? Sign me up!’” Ms. Leljedal said.

At the University of Florida, Ms. Leljedal performed in “The Beaux,” “Stratagem,” and “Legally Blonde.” But despite her love for the stage, her mother was a teacher, so she has always been in the “education world.” Closer to graduation, she realized her passion.

“At the end of college, I was reaffirmed to continue teaching rather than acting,” Ms. Leljedal said. “Still, I think I made the right decision because I’ve grown to have a deeper appreciation for my art through teaching my students.”

Theatre senior Miriam Colvin has Ms. Leljedal for Acting IV and Directing, and she has already impacted Colvin’s studies this year.

“She inspires me as an actor by encouraging us to make big choices and not doubt ourselves in work,” Colvin said. “She really highlights the idea that flaws can help you grow as a person instead of pulling you down.”

Having moved back to South Florida, Ms. Leljedal loves exploring the area with her dog Maggie. In her free time, she goes to the beach, plays trivia, and kayaks.

“My real-world perspective enhances my teaching because of the things I have gained,” Ms. Leljedal said. “I’ve learned to live in the moment over the years.”

Since coming to Dreyfoos, she’s loved being around her hardworking students and is looking forward to directing the spring musical, “Radium Girls.”

“I’m excited to sit in on juries and get the true Dreyfoos experience,” Ms. Leljedal said. “I think it will be an amazing year to come!”

From Broadway Back to DSOA

As soon as she posted the cast list, Dreyfoos alumna and theatre teacher Savannah Whetsell (‘11) escaped to her office. She knew all too well the stress, the joy, and the defeat in that first glance at the page.

Since the start of this school year, she has adapted to the Dreyfoos environment. She currently teaches Acting II, Theatre History, and Devised Theatre. Acting II gives students “building blocks [with] which to go into Acting III and IV.”

“We teach the basics of movement of voice work, text work, exploring monologues, and just getting them in their bodies and out of their heads,” Ms. Whetsell said.

Ms. Whetsell has been acting since she was 11, when she auditioned for Bak Middle School of the Arts. She originally wanted to audition for dance.

“At the last minute, I switched my preference,” Ms. Whetsell said. “My mom was like, ‘Are you sure?’ I was like, ‘Absolutely,’ and then I got it. I never stopped acting. It just never ended.”

“She was a memorable student because she was extremely hardworking and always showed an enthusiasm for learning,” Ms. Bregman said. “I am thrilled that she is at DSOA because she will certainly carry on the legacy of passion for excellence that has characterized our theatre department since its inception.”

Post-graduation, Ms. Whetsell got the opportunity to work professionally in New York with her friends and in warehouses, helping other people with their ideas. She even got the chance to work for the New York Theatre Workshop on their production of “Hadestown.”

“It was really cool being able to work with professionals and learn from them,” Ms. Whetsell said.

She went to Fordham University, where she double majored in performance and directed various shows. Upon graduating college, she worked at Don Estridge High Tech Middle School for two and a half years. She built up the program there into an elite, audition-required one that does two shows a year.

Although she enjoyed working there, when she heard about the job opening at Dreyfoos, she felt the urge to apply because of her personal connection.

“When I heard about the opening, I just put [my job application] out into the universe and I thought ‘Well, I graduated from there. I would love to come back to my old school,’” Ms. Whetsell said. “I think this program for all students is really special, so I had to throw in my name and now, I can’t believe it.”

In the end, she wants to contribute to her student’s future by passing on her expertise in theatre.

“I hope they walk away from my class with a better sense of who they are as an artist and an actor,” Ms. Whetsell said. “I want them to use all the tools I give them in their journey, whatever that may be, whether it’s in theatre or not.”

This year, she is excited to learn from her students and grow as an educator. She has already helped with callbacks for the fall musical and will continue to work on the production.

“They bring something new every day, and you can plan one thing, but then the energy that they bring in room can be something different,” Ms. Whetsell said. “It’s never the same. It’s not like a desk job; it gets me on my feet. There are a lot of great things about teaching. It’s a dream come true for me.”