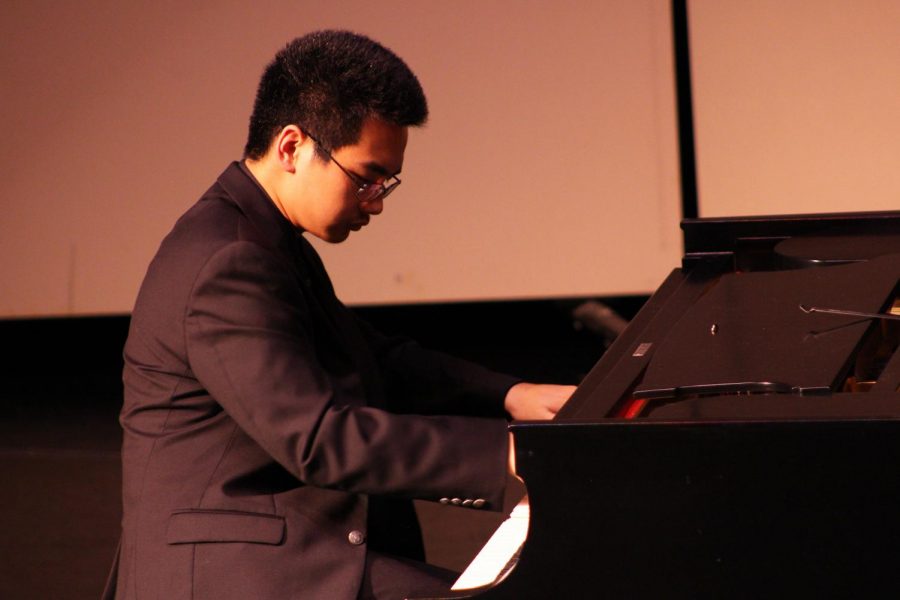 Piano sophomore Daniel Wang plays Sonata Op. 22 No. 11 in B-flat Major (Movement 1) by Beethoven. It was the second piece he played during the recital, after Prelude and Fugue in A-flat Major, BWV 862 by Bach. “In the beginning, I actually didn’t enjoy performing,” Wang said. “Eventually I came to enjoy it because I want to be able to perform music to an audience and make the audience feel what I feel when I practice.”

When most people think of the phrase “rock on,” they imagine a heavy metal rock artist pumping his hand into the air with the distinctive sign of the horns. But students in the Klavier piano class rocked out through the hammers and keys of the grand piano.

“My favorite piece out of all of them was the Debussy [Danse Tarantelle Styrienne],” Liu said. “I felt like it was the perfect mixture of technique and emotion that you could put into the piece. It really showed off your talents, but at the same time you could go slow and put your heart into it … I definitely feel like I have a connection to it.”

Each year, students in the Klavier class are given a new time requirement for recitals, up five minutes from the previous year. As sophomores, the pianists in Rach On were each required to play a repertoire that totaled 15 minutes.

“[The time requirement] put a little bit more pressure on me,” Matig-A said. “I had to focus on multiple pieces, work in different areas of the pieces, and really get into the mindset of each and every single one to get the mood into the piece.”

Although audience members saw only performers enter the theater and play their pieces, there was far more preparation that went into Rach On, both behind the curtains and before the concert began.

Piano senior Alessandra Fang, Creative Director of the Piano Department, worked to turn Rach On from a vision into a reality. She, along with piano junior Elizabeth Sinn, made flyers to promote the recital around the school, as well as the recital program sheet.  Fang expressed her wish for Rach On to extend her love of classical music to the rest of Dreyfoos.

“Specifically with Rach On, we just want to make sure that everybody receives the message that not all classical music is boring and slow,” Fang said. “It can also be really wild, entertaining, fun, lively, and crazy. That’s the beauty of classical music; there can be many spectrums of classical music, and it’s always fun to … find different styles and convey them.”

Performers relied heavily on other members of the piano department as well as experiences from their own lives, for everything from piece selection to motivation. Though each pianist sat alone on the piano bench during the recital, their journey to that point was far from a solitary one.

“I have to really give thanks to my parents,” Wang said. “They were the ones who really brought me up on piano, and … they’re the ones that push me to become the best I can. My fellow [piano] students, they’re always ready to help whenever you need any help, so I’m very grateful for that. Ms. Katz, [dean of music and piano teacher], has always been a strong support by my side.”

Before performing each one of their pieces, each pianist gave a speech containing historical and musical background. Despite being brief, these speeches enlightened the audience about what they were about to hear and delivered new perspectives.

“As a pianist, you should always know a little history behind your pieces, and especially its composer,” Wang said. “Rachmaninoff, for most of his life, was very poor. He was the victim of great pain, sorrow, heartbreak, and his music definitely showed that. It’s very important to know the history behind the piece, [as] you can perhaps understand [the piece] better.”

Performers expressed a desire to pass on a part of themselves to audience members through each chord, melody, and movement of the hand that they produced on the 7-foot-long Steinway & Sons grand piano.

“Every time I go to a performance, I want to feel excited about it,” Matig-A said. “If I feel excited, I feel like I can pass that vibe to the audience. I want to make a lasting impact on the audience. I know [that] I’m not going to be there every single day for every member of the audience, but at least a part of me, through my music, is going to last with them.”