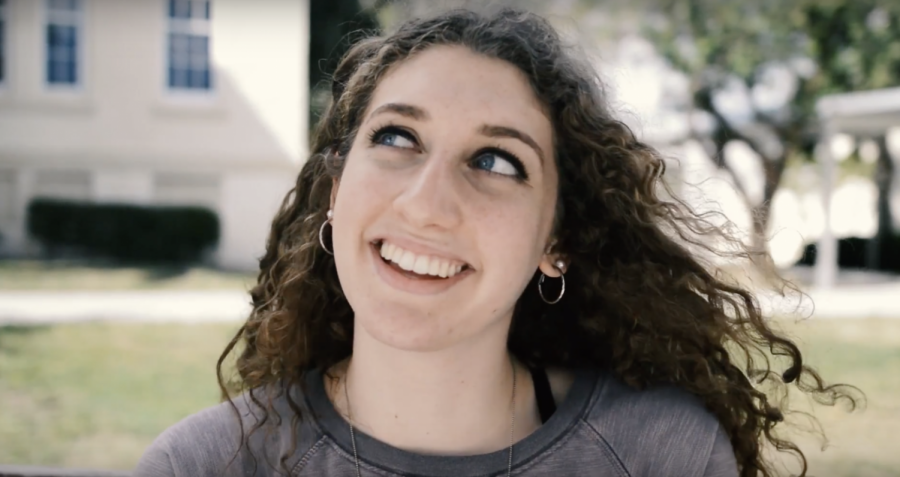 Photo courtesy of Brianna Seaberg, “Change of Heart” via YouTube

Theatre junior Elle Holzhauer acts as the lead role in communications senior Brianna Seaberg’s film “Change of Heart.” Holzhauer plays Claire, a girl who strives to find internal peace after the emotional trauma of losing a grandparent. “Acting in ‘Change of Heart’ was an amazing experience, as I got to collaborate with other talented students and refine my own style of acting,” Holzhauer said. “That just makes me love acting more. It’s not just the end product, but also the experience.”

The dimmed theatre, single spotlight, and red curtains are all part of an environment to which theatre junior Elle Holzhauer is accustomed. Starting her acting career at her local community theatre program, Holzhauer’s passion for theatre has broadened into acting for films, musicals, and plays. In an atmosphere that supports artistic freedom and creativity, Holzhauer’s tenacity to cultivate her passion has led her to win national awards and lead roles for acting.

What has been your favorite experience as a member of the theatre department?

My favorite experience was being a part of the production process that went into “All My Sons.” Not only did I learn so much about how to dive into a script and what it means to be a real, honest actor, but I also made such a strong connection with my theatre ensemble. I also learned more about the art form and why it is so significant to tell the stories of other people.

As an actress in many student-directed films, such as “Change of Heart” by communications senior Brianna Seaberg, how does the experience of playing a role in a film compare to acting in a performance?

[They] each have their own specialized freedoms. For theatre, it’s so unique because it is a live performance. Therefore, you have to know your lines and character the second you step onstage. There is no cutting off or retakes. You go onstage and you have to own and personify that character. I think there is more thought when acting onstage because you have to be aware that it isn’t just you: there’s also an entire live audience awaiting you. It’s finding that balance between knowing who your audience is and who you want to personify that requires a lot of thought and practice. With film, however, it’s a lot more isolated in the sense that the camera is in your face. But, it also gives you so much freedom and it allows you to naturally exhibit your emotions to your audience. There is also a lot more artistic freedom that goes into a film because no one has played that role before, so you get to experiment and even put your own personality into the character. This makes it so personal, and that’s something that is so beautiful to see and take a part in.

Who inspires you the most in the theatre industry?
The people that inspire me the most are Meryl Streep and Adam Driver. Meryl Streep has blossomed so much within the last few years, and I just love her style of acting from character development and portrayal of emotions to her stage presence. One of her quotes that pushes me to become a better actor is that you have to be passionate in what you’re doing. It’s not only the words you’re saying that matters, but also how you say it. My other favorite actor is Adam Driver. What I love most about him is that he didn’t come from the easiest background, but he was still able to find his passion and purpose within the theatre industry. I can find that parallel to my own life because theatre is also the one place where I can truly connect with people and find that purpose.

What is your favorite part in collaborating with other students in a different department such as an acting in a communications student’s film?
My favorite part of working with other students, especially from different majors, is that I can learn their own art form and understand how they individualize their artistic passions. When I worked with [communications senior] Brianna Seaberg, she had such a similar mindset to mine. At the time, she wanted to become a film director, while I wanted to be a stage actor. It’s so amazing that people from different majors and different art forms can fit together like puzzle pieces and create something together. Our film, [“Change of Heart”], was nominated for the All-American High School Film Festival in the Drama category. I was able to travel to New York City and network with professional film directors [from] across the nation. It’s that sense of community and reward that pushes me to possibly go down a career path of acting.

How has your artistic style evolved since attending Dreyfoos?
Dreyfoos is so different than your typical community theatre program. At Dreyfoos, you’re able to learn more about yourself and grow within your major. It’s entirely okay to not know what career path you want to pursue, and I think it’s so amazing that a high school can allow students to explore their own intuitions. In a sense, acting has been an unintentional therapy for me. It allows me to take whatever I’m going through and channel it into such a creative outlet. Having those tough theatre teachers to push me to be better with my speech fluency, posture, and physicality has been an amazing experience. Also, everyone from the theatre department has been so supportive of each other, and it’s impressive that everyone just “clicks” with each other. I’ve definitely grown so much, and I can’t wait to continue growing and see where my acting career takes me.

What do theatre and acting mean to you?
They mean everything to me. I don’t know what I would do without them. Those are always the things that I turn to. I remember just sitting in front of the television for hours trying to learn about how the actors crafted such a beautiful talent. My first memory of acting was when my parents put me in the basement because I was having a tantrum, and they put “Cats” on the television, a musical film from 1981. And that was such a pivotal moment in my life. Everything about that musical was exciting and beautiful: the lighting, set design, colors, and costumes. When I was young, I remember just being obsessed with the appearance of the film. Now, I realize just how symbolic the film was from the production process to the characters themselves. I really grew from this experience in my life, and this led me to try out for a local theatre program. I actually got a lead role after auditioning with almost no experience at all. I was able to play the princess from “Rumpelstiltskin.” From there, I got to learn more about myself and my purpose in this world as an actor.