PRISM PRESENTS A JOYFUL START TO THE HOLIDAY SEASON 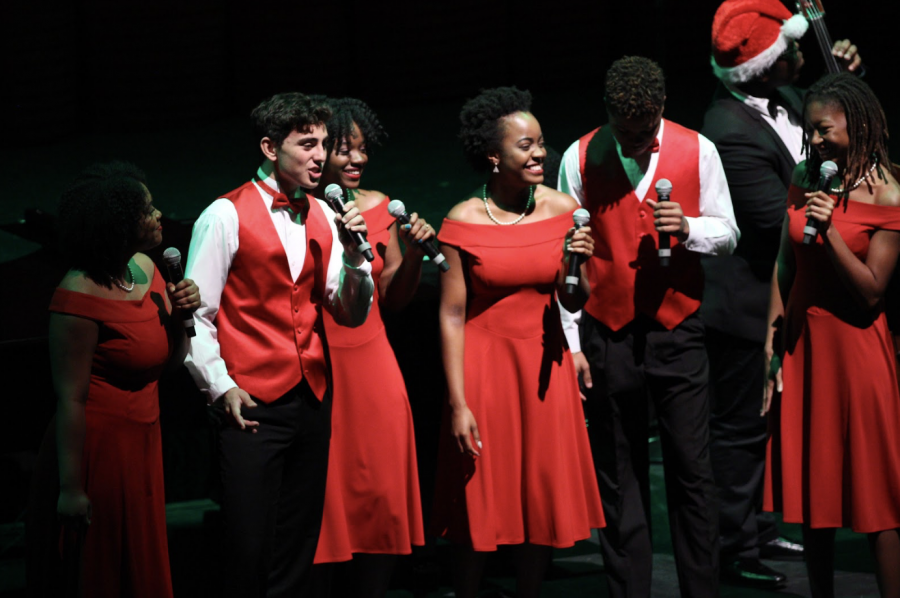 Many of the songs performed throughout the concert were able to create a storyline, with the performers adopting character roles, or expressing the song through choreography.

As the curtain rose, the performers were excited for their hard work from the last few months to culminate into a single night. The holiday months marked the showcase of Prism, an annual concert performed by all music majors, from vocal and band to strings and piano. With tickets sold out the day they went on sale, Prism was held on Nov. 29 at the Kravis Center of Performing Arts.

“The preparation for Prism is intense and stressful,” band senior John Degnan said. “We only have one day of rehearsal at the Kravis before our official performance day.”

The process began with auditions, where soloists and ensembles performed for music teachers to receive a competitive spot within the program. After rounds of auditions, students began rehearsing both in school and after school. Prior to the official evening performance, Dreyfoos students, alongside students from other schools in Palm Beach County, were able to preview the show during the dress rehearsal.

“It was nerve-racking to perform in front of teachers and my peers, but in the best possible way,” vocal junior Carolyn Lord said. “Because we were performing in front of our peers, it was rewarding to see many of our friends out there enjoying the performance and cheering us on.”

Rather than being in Meyer Hall, where Prism used to be held, the

grand ambience of the Kravis Center fostered a different type of environment. Despite the vast size of the theater, students established an intimate atmosphere with holiday-themed music.

“I love performing in the Kravis Center,” Degnan said. “There is so much energy from the audience and the hall that greatly affects the performers. Overall, Prism is a very special experience that I am extremely thankful for.”

Opening the show, the Philharmonic Orchestra collaborated with vocal students in performing “Over the Woods and Through the Rainbow,” composed by Lydia Maria Child. The famous lyrics, most notably in children’s rhymes, were designed to reflect the mystical imagination and cheer of the holiday season. Other pieces included Prism traditions, such as “Santa Baby,” a music score sung by vocal students, and songs new to Prism, such as “You’re a Mean One, Mr. Grinch,” performed by a brass quintet.

“I have so many favorite memories from this year’s Prism, from hanging out with my friends backstage to cracking jokes in between songs,” Lord said. “But my best memory would be performing ‘Santa Baby’ and hearing the audience laugh and clap along as we did our choreography.”

The program for Prism featured a wide variety of songs including fast-tempo and upbeat music scores, along with slow-paced melodies. Despite the range of emotions conveyed through music, the overlying theme presented throughout the night tied to the holiday spirit of gratefulness, cheer, and reminiscence.

“For every piece that we sung, there was a different emotion we wanted to convey to the audience,” Lord said. “Some were reflective and solemn while others were there to make the audience feel the joy and excitement of the upcoming holidays.”

Closing the concert, the music department united together in a performance of “Let There Be Peace On Earth,” a song that promotes harmony over division. Typically performed during the holidays, the song was originally designed as a religious hymn after the songwriter, Jill Jackson-Miller, discovered the power of unconditional love.

“I enjoyed all the pieces I participated in, but my favorite piece from this year was ‘Let There Be Peace On Earth,’” vocal senior Isabella Fine said. “Even though the piece is simple, it conveys a wonderful message to the audience and it’s so fun to work with the Philharmonic Orchestra to create such a beautiful sound to finish out the concert.”

As this was their last Prism concert, seniors recalled their favorite moments brought forth during the preparation and execution of Prism. From the small moments backstage to the finale of the show, students enjoyed their time with fellow performers and peers.

“My favorite memory from Prism was during my sophomore year,” Fine said. “The Philharmonic Orchestra and the chorus opened the concert with ‘Narnia.’ I always love being in mass pieces, and it was the most powerful piece we’ve ever done as a group. [The chorus] sang in the boxes while [the Philharmonic Orchestra] played onstage, so it was also really cool to see the show from a different perspective.”

Despite the anxiety that many felt leading up to the performance, students were able to perform for friends and family at the annual concert. Marking the end of this year’s Prism, students hope that the showcase gave the audience a cheerful start to the holiday season.

“At the end of the day, Prism would be impossible without the outstanding music faculty that works incredibly hard to organize the concert every year,” Degnan said. “And I’m also happy that we were able to share our music with other people.”