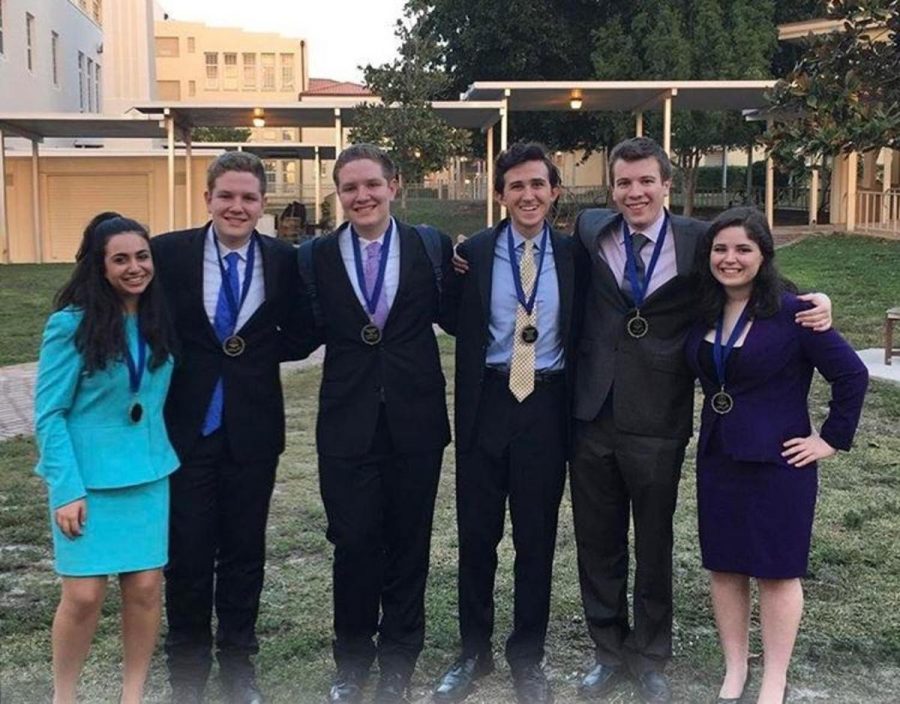 Photo courtesy of the Dreyfoos Speech and Debate Team

Weeks of preparation, stay afters, and donations were invested to prepare for the upcoming debate tournament held on the Dreyfoos campus. During the tournament, several students ranging from all grade levels competed and volunteered for the Palm Beach Catholic Forensic League (PBCFL) Grand Finals tournament on Feb. 25 at Dreyfoos. Select high schools across Palm Beach County and southern Martin County traveled to Dreyfoos in hopes of winning an award and a spot in the national tournament.

“Preparing for the tournament was definitely some hard work, but as a team we all contributed by bringing in food and helping out,” communications sophomore Jillian Bamdas said. “For those who were not competing, many were volunteering.”

In preparation for the tournament, students volunteered to tabulate scores, clean up classrooms, and provide directions to guest competitors. Not only were students needed to help cover shifts, but the speech and debate team also received a variety of donations for concessions and lunch meals. Classrooms were tidied up and given permission to be used in the tournament in the weeks preceding the competition.

“Before our tournament, I failed to realize just how important volunteers are,” communications sophomore Catalina Correa said. “It was definitely a lot of work and I think competitors and judges should be as considerate as possible when it comes to competing at different schools. [However], it was interesting to experience the other side [of volunteering instead of debating]. It was a lot of fun to see the debaters [from other schools] exploring our campus and spending the day with us.”

Students who received a medal qualified to compete at the National Catholic Forensics League (NCFL) Debate Tournament held in Kentucky from May 27 to 28. From debate to speech events, eight Dreyfoos students qualified to compete at the national tournament. Communications juniors Maya Levkovitz and Alex Gordon, seniors Jack Yan and Jake Perl, and freshmen Marco Munoz, Mara Vaknin, Kyle Ahern, and Kevin Ahern qualified for the national competition in May 2017.

“The event I qualified in was Duo Interpretation,” Ahern said. “I felt a wave of intense emotions when they called my name as a qualifier. My first thought was ‘I can’t wait to share my piece on a national level at Kentucky.’ After that, I just felt relieved and proud that our message and the piece came across effectively.”

Separated into preliminary, semifinals, and final rounds, speech and debaters underwent several rounds of competition with a variety of competitors. Between rounds and sessions of competition, the minds of students were swarmed with anxious thoughts questioning if they scored high enough.

“Every tournament is always competitive,” Ahern said. “I’ve learned through experience though to never let the level [of] competition affect me. Every performance needs to be my best. [But] not going to lie, it was very weird and different competing at Dreyfoos. Doing your [competition] piece in classrooms that you have taken classes in is very surreal.”

After the tournament ended, the cafeteria where the award ceremony was held was filled with congratulations and excitement following a long day of competition. Despite the rigorous competition between students for the tournament, students were contempt with their individual performance throughout the day.

“My favorite part of the tournament was being able to do the thing I love by competing,” Bamdas said. “[I also got to] represent our school [since the tournament] was held at Dreyfoos.