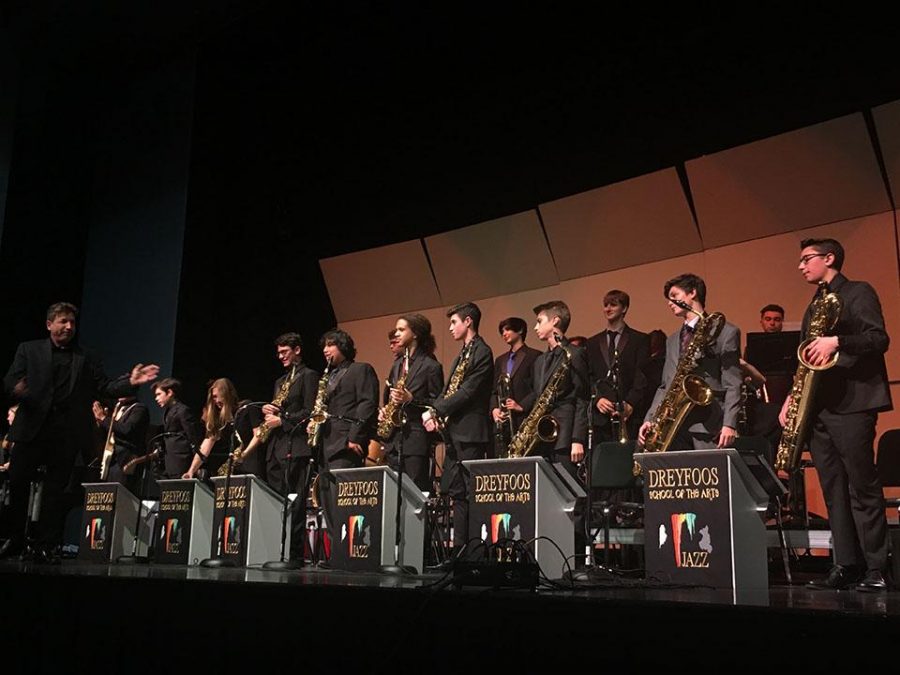 As musicians tinkered with their instruments and pervaded a lively melody, the audience tapped to the beat of the music with awe. The band department held their second jazz concert of the year on Nov. 21 in Meyer Hall. Sharing the stage with jazz ensemble students from Bak Middle School of the Arts, those who attended the concert warmly welcomed their presence.

“We spent a lot of time on style and articulation just to make [this concert] perfect in class and after school,” band sophomore Mark Silver said. “I hope that the audience was excited to be here.”

Ten minutes preceding the start of the concert, four musicians performing the bass, saxophone, drum, and piano entertained the audience with impromptu tunes. Opening the concert, band teacher Evan Rogovin welcomed family, friends, and parents to the concert, while wishing the audience a festive holiday season.

“It’s thrilling to share the stage with [the Bak students,]” band senior Austin Klewan said. “After I left the stage, everyone was shaking hands and carrying conversations. It was like being a celebrity.”

Contrary to the typical performance, Bak students commenced the start of the concert with four songs: “Moanin”  by Bobby Timmons, “Misty” by Erroll Garner, “Down at Dukes Place” by Ayatey Shabazz, and “Cantaloupe Island” by Herbie Hancock. From Chicago blues to old-time classics, director and Bak instructor Kevin Cripanuk livened up the stage with his enthusiastic involvement towards the music.

“It’s definitely fun to play with the Bak students,” Silver said. “We know that they’re looking [at] us for inspiration and ideas to put into their own music. I hope we did just that.”

As the Bak MSOA segment came to a close, the audience welcomed the Zero Hour Jazz ensemble to the stage. Directed by Evan Rogovin, the group played “Alright, Okay, You Win” by Watts, “Sail Away” by Tom Harrell, and “Birk’s Works” by Dizzy Gillespie. The nostalgic song selection featured old-time melodies that encouraged the audience to tap their feet, sing along, and reminisce about the golden days of their youth.

“My favorite song that I played tonight was definitely ‘More Today Than Yesterday,’” band sophomore Nicholas Cavaliere said. “It’s funky and groovy at the same time.”

Closing the concert, director Pedro Hernandez welcomed Jazz Ensemble One showcasing “Lulu’s Left Town” by Mark Taylor, “More Today Than Yesterday” by Upton, “After the Rain” by Sammy Nestico, and “Watermelon Man” by Hancock. Accompanying the band musicians, the number “I Just Called To Say I Love You,” by Stevie Wonder featured a student live singer that correlated with the tempo of the soothing melody.

“I would say my favorite song tonight was ‘More Today Than Yesterday,’” Klewan said. “It’s an old-time swinger classic and it really gets the crowd going along with the music.”

Throughout the night, musicians reflected lighthearted and flamboyant melodies. As the last sounds resonated through the night, the audience rose from their seats to congratulate and applaud the diligent students.

“I hope the audience is singing, dancing, and having a good time,” Klewan said. “That’s really what music is all about.”