Speech and Debaters Shine at SpeakEasy 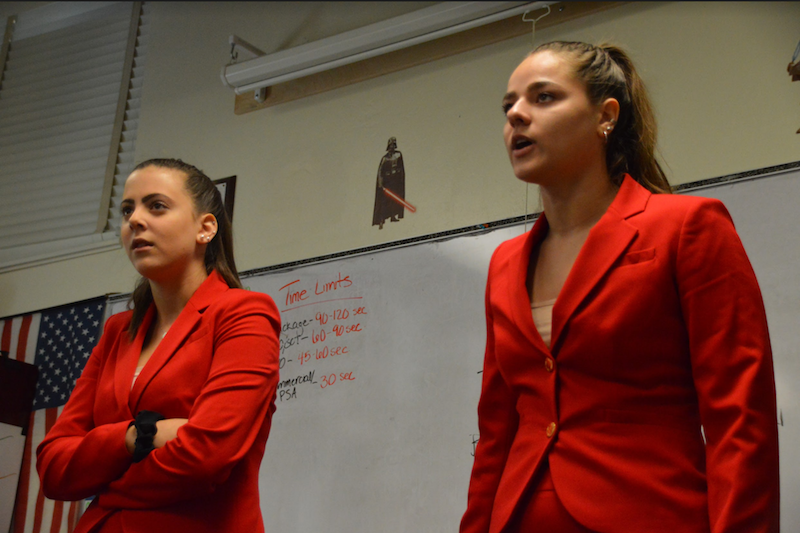 In a classroom, 10 students simulate a Congress session where they take turns presenting speeches and debating whether to pass or reject a legislation. Across the hall, additional students showcase their 10-minute memorized speeches reflecting their passions and ideas. While speakers are doing what they enjoy, parents are bouncing from room to room witnessing the talented debate students perform what they love to do.

On Oct. 22, the debate team hosted their annual fundraiser, SpeakEasy, where family, friends, and peers were given an opportunity to watch them perform. Often, observers are restricted from watching debate rounds at local tournaments, so SpeakEasy gives these families s a unique opportunity. The team hopes that parents can connect with the debate department by watching the variety of events and performances, and if possible, donate money to support the team.

“[At SpeakEasy,] I did Public Forum, which went really well,” communications sophomore Finnley Senese said. “I thoroughly enjoyed being able to show people what I love to do and hopefully give them a better understanding of what speech and debate is really like.”

Public Forum is an event where students thrive from the responsibility of teamwork as they are divided into teams of two. During rounds, teams present their case, persuading the judge to vote on the pro or con side of an argument. Other than Public Forum, the speech and debate team performed Congressional Debate, Original Oratory, Dramatic and Humorous Interpretation, and Extemporaneous Speaking.

“The event that I did [at SpeakEasy] was Original Oratory,” communications junior Reilly Sams said. “I hadn’t really done it prior to the event, so I was really glad that I did it. It was really interesting to see the parents’ reaction to our pieces and it helped me develop my oratory. [The fundraiser] definitely gave me more practice and made me a better speaker.”

Parents were able to move freely from room to room to see all the events being performed. Additionally, complimentary breakfast including coffee and bagels were available for the parents.

“[Performing at SpeakEasy] is different than at a tournament because [the performers] aren’t really competing, as opposed to a tournament,” Senese said. “The performers are just presenting and delivering their event to other people, as well as helping the audience understand the event. Even though it’s not much of a competition, I feel like the presentation portion of the event was super important for the parents to understand the event. SpeakEasy, overall, is a really fun time for students to perform their event. Also, it’s a really good opportunity to practice and improve on our personal events.”

The fundraiser fostered an atmosphere significantly different than at a tournament. Students were able to perform the event without the pressure of receiving a bad rank. Still, this heightened the student’s interests in performing to the best of their capabilities, with the chance of improving their piece or speech.

“For me, [doing SpeakEasy] was a lot less scary in a sense than at a tournament,” Sams said. “I knew that I wasn’t being judged as harshly, but at the same time, I was performing in front of debate parents, who knew the event well. But it was much more relaxed than I thought. After everyone went, we were able to talk to the parents and each other. It was a really nice atmosphere and I’m really glad that I participated.”

The SpeakEasy fundraiser was a success for the Speech and Debate team. Students were able to gain public-speaking experience and parents were able to see the passion radiating from the students during performances. Next year, the team looks forward to their annual fundraiser where they hope to welcome new performers and raise support for the team as a whole.