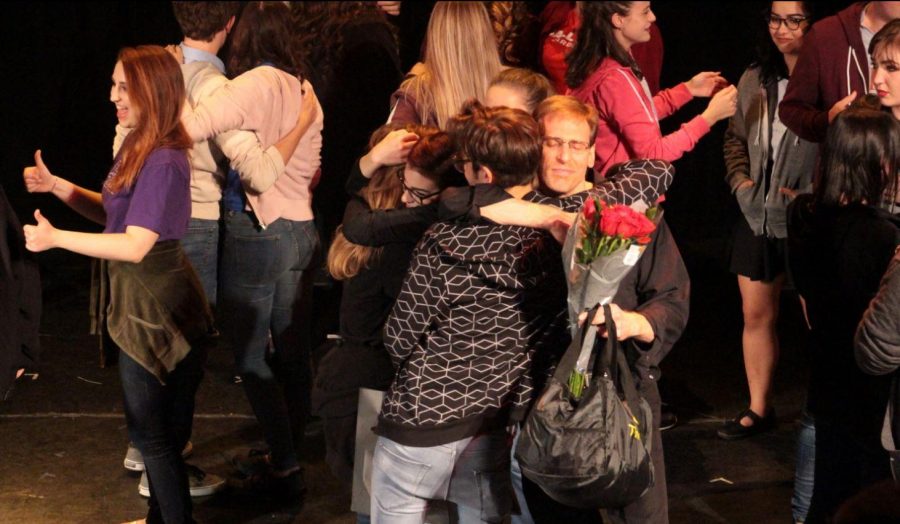 Theatre senior Zachary Biggins hugs theatre dean Bruce Linser after presenting him with a gift. It is both Biggins and Linser’s last year at Dreyfoos, with Biggins going to Carnegie Mellon University and Linser leaving to work at Florida Atlantic University (FAU).

Parting can be such a sweet sorrow, especially for the Dreyfoos theatre class of 2016. On April 29 and 30, seniors took to the stage for the very last time, performing monologues and songs in the Black Box Theater for the annual senior showcase.

“For some of us, it was our first and last time performing here,” theatre senior Jillian Tone said. “There was a lot of emotion, especially because we’ve been with a lot of these people for seven years, so it’s crazy that we’re all together for the last time and then we’re all leaving.”

The theatre seniors began preparing for their final show two weeks ago, beginning with their initial audition on April 18. Once it was determined who was going to be in the show, students had to to stay after school for each rehearsal day from 4:15 p.m. until 6:30 p.m. As they inched closer to the date of the performance, they rehearsed until 9:30 p.m. After making sure they knew their roles, the show was teched the week of April 25 to prepare for the opening night on April 29.

The show was a conglomeration of individual monologues and musical numbers that even included tech theatre majors who, as tradition, participated in the opening and closing songs of the night.

“It’s the end of an era because the theatre department is changing a lot,” Tone said. “[Theatre Dean Bruce] Linser is leaving with us, so in a way, we’re the last of this kind in the Dreyfoos theatre department.”

By the end of the showcase, the seniors were out of costume and dressed in jackets that they had zipped up. Following the traditional slideshow, which featured photos and videos of every theatre senior, they proceeded to unzip the jackets to reveal a college shirt. The seniors then proclaimed to the audience where they would be attending school next year.

“It’s bittersweet for all of us,” theatre senior Dylan Jackson said. “It’s weird how long four years seemed, but how quick [it went by]. I would hope [our class will] be remembered for our resilience, because we’ve been called lazy and not eager. I think we took that and turned it around. There’s always certain stereotypes; the musical theatre diva, the leading man, and I think this class really broke that mold and we created our own. You can’t recreate us.”

The show closed with the entirety of the senior class belting out “The Summer You’ll Always Remember” and “Come So Far (Got So Far to Go)”. Following the show, the theatre seniors were full of emotion, and since it was both their final performance with Mr. Linser and each other, many of them had burst into tears; however, they believe they will still keep in touch even after high school.

“[I] would do it again,” theatre senior Drew Lederman said. “Hands down, it’s the people that I’m going to to miss the most. The people make the department what it is.”